Home is where the art is

For Simone Suss, designing a home is a matter of establishing priorities. On moving house, her first thought was to ‘christen’ the kitchen with Chilean sculptor Livia Marin’s Broken Things installation. ‘Our first meal here was with Livia, who came to install it herself. As soon as the art was up, it felt like a home.’ The house, a light-filled neo-Georgian villa in Hampstead Garden Suburb, was built in 2011 specifically to accommodate the passion of Suss’s art-collector husband. For Simone, an interior designer with a growing practice, the challenge was to design a space that works with a rolling display of paintings and sculpture while retaining the feel of a family home. ‘I have three kids,’ she explains, ‘so it has to be practical on that level, but I also have a husband who is very particular about his art, so there were certain limitations.’ With a gallery’s worth of art to hang, walls were a basic requirement. ‘Open-plan was never going to work for us,’ says Suss. ‘In any case, that’s not how I wanted to live. If my kids are playing on the computer, or they’ve got friends round, I want to be able to shut the door.’ Set up by Robert Suss, an ex-financier and Chair of the Patrons at the Royal Academy of Arts, and Simon Franks, founder of Redbus Group and co-founder of LoveFilm, the FranksSuss Collection comprises some 1,000 pieces and focuses on emerging and mid-career artists from countries in the throes of socio-political change. ‘If an artwork is coming into the house, I have to approve it,’ says Simone – and the smaller members of the family have equally firm ideas. Above the kitchen table, a Venini chandelier by the Campana brothers bristles with dismembered Brazilian dolls. ‘When we first put it up, my middle one, who was about two or three at the time, cried. We thought, “Well, if it still bothers him after a while, we’ll take it down.” I’m a firm believer that you have to be positively impacted by what you see on the walls. If things are bothering you, then it’s not right.’ There is a subtle theming of art to purpose in the Suss house. In the hallway, where coats are hung on a Magis ‘Paradise Tree’ stand, Charlie Billingham’s canvases depicting details of Regency dress are a nod to the classic Georgian feel of the space, with its black-and-white tiles and sweeping banister. A cinema room in the basement is hung with Frank Worth’s classic Hollywood portraits, while in the downstairs lavatory a Keith Haring has proved a talkingpoint for guests. ‘Rob bought it online and didn’t look too closely at what it was,’ explains Suss. ‘When it arrived, I said to him, “You do realise you’ve just bought a doodle of lots of penises?”’

Lighting the art is key. Suss has devised elegant solutions with wall-washes (‘Rob hates spots, and I wanted to light the walls rather than the middle of the room’), while each of the children’s bedrooms has a night-sky galaxy of fibre-optic stars embedded in the ceiling. The standard ‘white cube’ aesthetic beloved of gallerists was not, Suss felt, appropriate to a domestic setting. The living-room walls are hung with cloud-grey textured paper: ‘It felt a little bit more luxurious, and less of a gallery. I really love designing with pops of colour, so the background palette is quite neutral.’ As colour pops go, a hypnotically beautiful Yves Klein coffee table – perspex filled with miniature sand dunes in hot, saturated pink – is a showstopper. Equally arresting are the grass-green glass panels in Suss’s otherwise all-white kitchen. ‘I knew I wanted some shade of green, and then my daughter got a T-shirt on the last day of summer camp, which was exactly the colour inspiration I needed.’ When it comes to her commercial and residential clients, Suss is skilled in interpreting the fantasies of others. A house in north London references its owner’s passion for the Balearics. ‘We kept everything light and airy, and had a rug made in tones of blue fading into white, so that even though she’s in Mill Hill, she kind of feels like she’s in Ibiza.’ For shoe designer Sophia Webster’s flagship boutique in Mount Street, Suss collaborated closely with the designer to create a wonderfully feminine shop/salon with ‘stiletto’ display hooks and lavender velvet banquettes studded with neon coral buttons. ‘It has to be Sophia’s world. She has amazing brand codes including flamingos and butterflies in her designs, so we worked together on incorporating them into the fabric of the store.’ Knowing when to indulge and when to interpose is as much a matter of tact as of taste. ‘It’s all about the client’s vision,’ Suss concludes. ‘I may have my own ideas about how things should look, but ultimately my job is making dreams work.’ 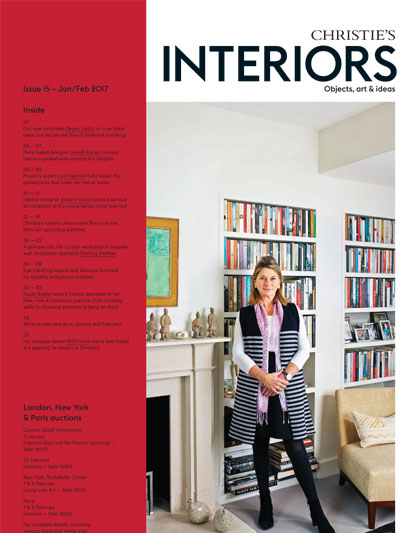 Get in touch with the Studio Suss team.